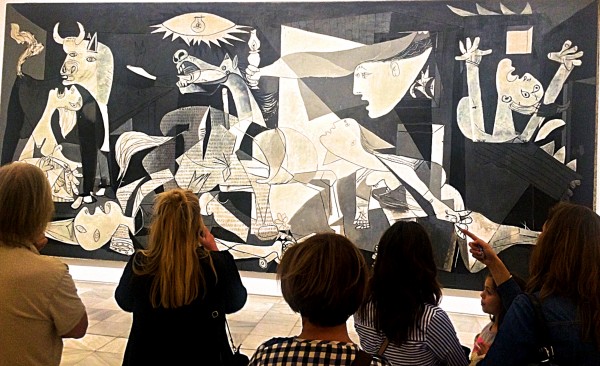 Crouded in front of Guernica. All photos by Henning Høholt, Kulturkompasset

MADRID/SPAIN: Pablo Picassos eminent large war reminder painting Guernica, is this summer presented at Museum Queen Sofia  in Madrid, It is a remarkable event to see this famous painting together with a framework of other famouse Picasso pieces of Art. Kulturkompasset visited this museum lately, and had photo permission to photographe Guernica.

We will return with an additional reportage, presenting other famouse parts of Museum Queen Sofia,among them paintings by Picasso, Mirö, Dali, Braque, Legér,  Delaunay, and others.

Pablo Picasso was born in Malaga in 1881, dead in Mougins, France 1973. When in early 1937 Pablo was asked to produce a painting for the Spanish Pavilion, he told the Republic’s delegates that he was not sure he could do the kind of picture they wanted. The world of his art had been till then essentially intimate and personal, bound by the walls and windows of a room; he had almost never spoken to the public realm, still less to political events; since 1925 his art had often steered close, claustrophobically, to nightmare or monstrosity. Yet the painting he eventually did for the Republic spoke grandly to the new realities of war. And the scene of suffering and disorientation he showed us has lived on, as an emblem of the modern condition, for eight decades. Guernica has become our culture’s tragic scene.

Are there continuities between Guernica and the strange, often agonized vision of humanity that Picasso had set forth over the preceding decade? How did Picasso’s distinctive set of concerns, which at moments seem dark to the point of despair, inform his final picture of women and animals in pain? 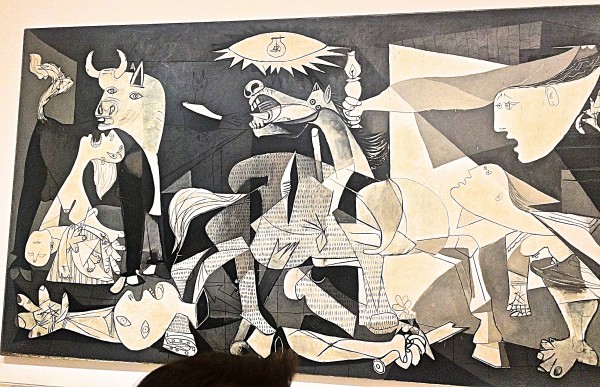 One writer said of Guernica that in it the world had been “changed into a furnished room, where all of us, gesticulating, wait for death”. Since 1937, generations of viewers across the globe have found the painting’s image of terror indispensable – maybe even cathartic. This exhibition asks why
. It is clear that Guernica ‘s epic, compassionate treatment of violence moves beyond the dangerous fascination with the subject that had characterized much of Picasso’s work during the late 1920s and early 1930s. But would Guernica have been possible without that previous fixation? Isn’t violence very often “fascinating” as well as repellent? How does an artist represent it without falling under its spell? What is involved – psychologically, aesthetically – in giving Terror public form? 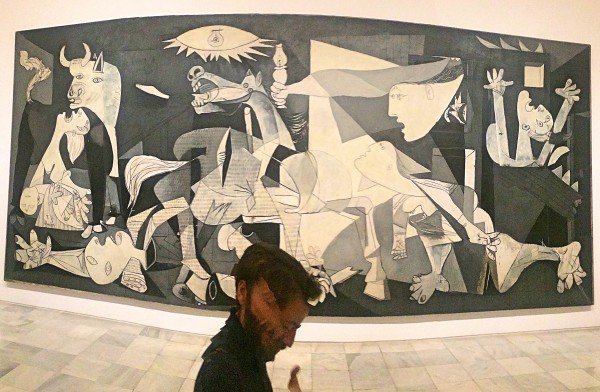 Guernica in Museo Reina Sofia, widescreen with our excellent guide in front

As part of this exhibition, a selection of results are presented, and serve as a historical counterpoint, from the research project Fondo Documental Guernica (Guernica Documentary Collection), spanning the period from 1937 to 1949. The project, which got under way in the Autumn of 2015, aims to bring together and study the largest possible number of documents and references — correspondence, installation photographs, graphic documents, audiovisuals, plastic arts — related to the most emblematic work in the Museo’s Collection. This selection of documentary resources seeks to add to a greater understanding of the painting: its origins, the exhibitions it has been part of, the propaganda it has been used for, and its place in art history. Furthermore, it demonstrates the way in which Guernica has transcended its own physicality and how its widespread recognition has led to its artistic value and political value becoming inextricably intertwined.

With the exceptional support of the Musée national Picasso-Paris: 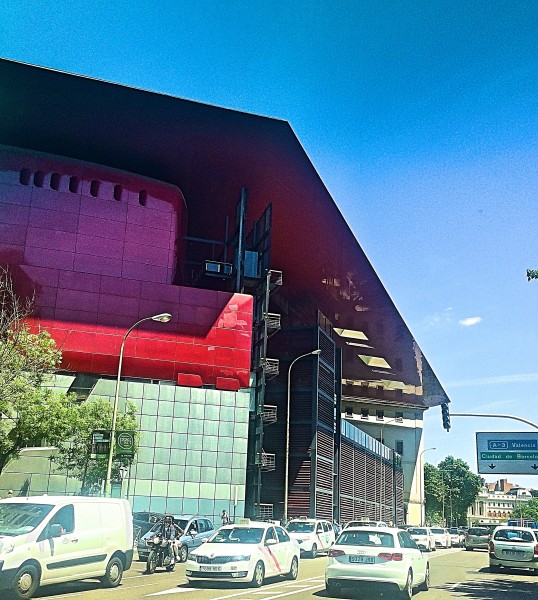