By Henning Høholt on 3/26/17 • Categorized as Uncategorized

PARIS/FRANCE: One of the worlds real famouse sculptures Auguste Rodin, who very many of the audience in one ore other way is familiar with is Auguste Rodin, who made some iconic sculptures. To mark the centenary of his death, the Musée Rodin and Réunion des musées nationaux Grand Palais are joining forces to celebrate Auguste Rodin (1840-1917)

– hyperprolactinaemiaacquired, global or situational. Adequate attention to viagra for sale.

. The exhibition reveals Rodin’s creative universe, his relationship with his audience and the way in which sculptors have appropriated his style. 22. March- 31. July 2017.

Balzac, an impressive large version of the great personality in his indoor coat. 1898.

Featuring over 200 of Rodin’s works, it also includes sculptures and drawings by Bourdelle, Brancusi, Picasso, Matisse, Giacometti, Beuys, Baselitz and Gormley, shedding new light on this giant of sculpture. A total off app. 350 works.

In the milieu around Rodin we found all the great cultural capacities for his life periode 1840-1917.

And as all other artists, they were finding motivs and interesting personalities to portray during that periode. 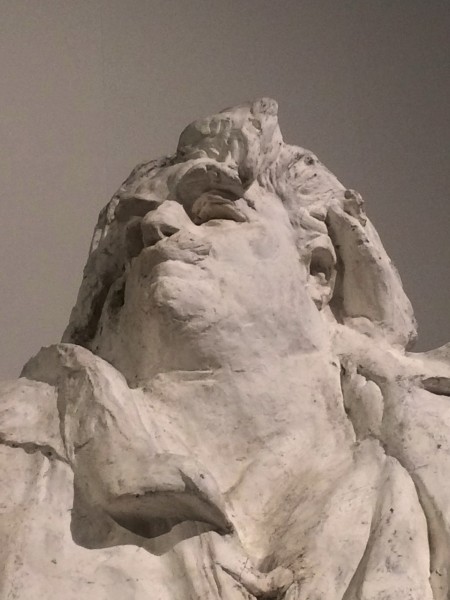 A big personality was, of course Honoré de Balzac, that we at this exposition see modeled in plaster in 1898 in a daily morning or all day coat. Since Balzac died in 1850, when Rodin only was 10 years old, we can´t see him as one Rodin had known, but he got the request to make a monument of Balzac, that he did in his own marvelous way.

Torso of the Angel Age, drapé app 1895-96. Made in plaster, and with plaster coated fabric But a link to the following dressing gown for Balzac.

Monument to Balzac is a sculpture  by Auguste Rodin in memory of the French novelist. According to Rodin, the sculpture aims to portray the writer’s persona rather than a physical likeness.

The work was commissioned in 1891 by the Société des Gens de Lettres, a full-size plaster model was displayed in 1898 at a Salon in Champ de Mars. After coming under criticism the model was rejected by the société and Rodin moved it to his home in Meudon. On July 2, 1939 (22 years after the sculptor’s death) the model was cast in bronze for the first time and placed on the Boulevard du Montparnasse at the intersection with Boulevard Raspail.

He too worked in smaller sizes, than what we are used to see, furthermore, sketching, working with ceramic, and he too was working a lot with details in his preparation work, that to someone looks unfinished, but he was only interesting in going deeper in to the details that he later should use for his big works, that he, as most of the big sculptures of the world, first made in smaller sizes in f.ex. plaster, and then enlarged and developed until the finished results that are these ones who are wellknovn. In this exposition we are enjoying to see the inspiration that Rodin made to many more, or less, successfull sculpturers in France and around in Europe. 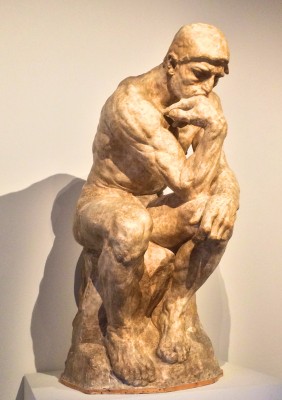 The famouse Thinker, that can be bought in nearly all souvenirs shops in Paris, in different colors, I have it in black at my toilet. Beautiful. but see next photo, where Georg Baselitz, German sculpturer in 2009 made his impression of it;; “Valt ding zero)

Curators without, a wider view, than to its neighboor countries?

However, I am sorry to notice, that it seems like the curatorial team, have a limited view on Europe, and who were inspired by Rodin, it seems that they don´t know that also in Scandinavia sculptures were made by outstanding and world famouse artists, such as for example the two great norwegians Gustav Vigeland and Per Ung.

Without such famouse European names, this memorable exposition seams uncompleted.

And “by the way” shows Georg Baselitz inspiration of the Thinker: Ha ha ha. Of course I do understand, that they want to provocative and remark them self
. 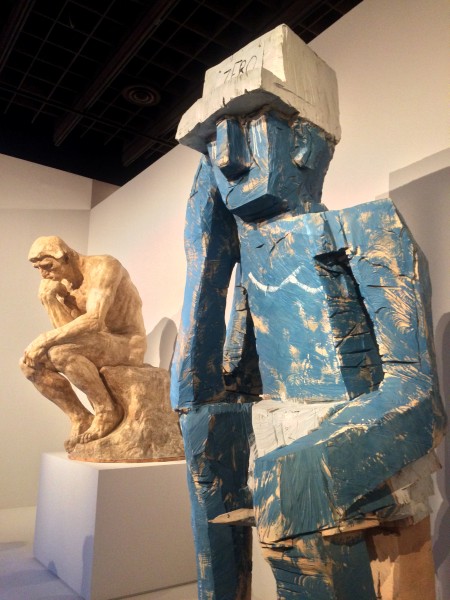 Georg Baselitz version from 2009 and Auguste Rodins version of the same motiv. Guess, which one I prefer?

Kulturkompasset plan to return back to other parts of this interesting and wide exposition during the spring.